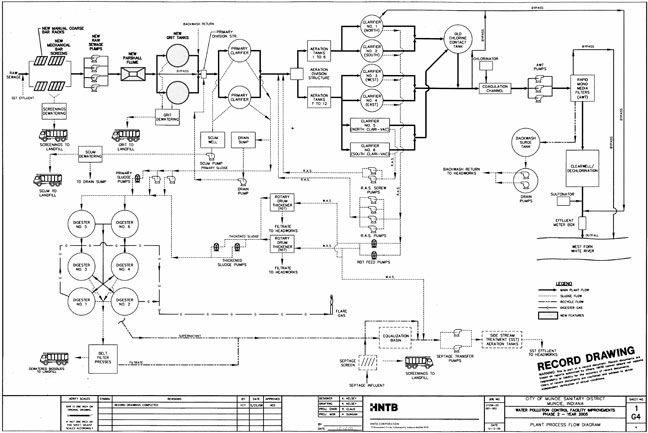 An EPA grant funded a project begun in 1983 that focused mainly on sludge processing and improving the existing land application/management program. It included new return activated sludge (RAS) pumps, 4 filter belt presses, semi tractors and tankers (6) and land application vehicles for both liquid and dried sludge (5). Additional waste pumps, transfer pumps and various other process pumps were included, as well as 4 new centrifugal blowers. 2 centrifuges were included for waste activated sludge (WAS) thickening prior to digestion.

A new AWT pump station was completed in 1996 which consisted of 3 200 hp submersible pumps to replace the 3 screw pumps which were part of the original 1976 construction.

A 42” diversion line with an additional outfall (#30a) was completed in 1998 at the AWT to bypass filters and maintain effluent flow during high river levels/flood conditions. New weirs on the ‘old’ (1941) secondary clarifiers and the rectangular (1976) clarifiers were included as well as a new operable main discharge sluice gate on the final outfall (#21a).

Phase I and Phase II projects were started in 2000 and were undertaken consecutively to replace, improve and repair much-existing equipment from the original 1941 & 1956 projects. Phase I focused mainly on the ‘back end’ of the plant and included 2 circular primary clarifiers to replace all the existing 1941 & 1956 rectangular ones. A new primary pumping facility/control building and a flow control basin to modulate the primary effluent/ return activated sludge (RAS) ratio/mix to the aerators were also added. 2 new belt presses replaced 3 of the 4 original belt presses from the 1983 project. A complete sludge conveyance facility was constructed to transfer the dewatered sludge from the presses to trucks for landfill transport. The 2 anaerobic digesters from the 1956 project were upgraded and repaired with draft tube mixers retrofitted for each(4 per). An existing, unused basin was converted to a side stream treatment (SST) process and a septic receiving station (SRU) was built for domestic haulers to discharge to.

In 2011, MSD undertook 2 improvement projects. CSO 18 was relocated & renamed CSO 37. The CSO was moved from the north side of White River across from the Treatment Facility to the south side of the river on the grounds of the Facility. Also, the Jakes Creek Lift Station was improved and a 2.5 million gallon equalization tank was erected for excess storm flow. Both of these projects are completed and online.