Both the Miami and Delaware Indian tribes originally inhabited the area surrounding the West Fork of the White River. Settlers began arriving in the area in 1801.

In 1886, natural gas was discovered, beginning the Gas Boom. Increasing population and industry created from this boom resulted in large discharges of pollution to the White River.

By 1901, Muncie’s population had swelled to over ten thousand people. Industries producing steel, bricks, and cars discharged pollution directly to the river.

It was common to see the White River run green, brown, yellow, and/or red from additions of untreated industrial waste and raw sewage.

Toxic pollutants (including ammonia, cyanide, and heavy metals) were in such high concentrations in the White River that it was unsuitable for all but the most tolerant forms of aquatic life and unusable for human recreation.

“We only have one Earth, let’s all work for its protection.”

The BWQ was created as a local testing and enforcement agency designed to clean up and protect the White River by addressing potential pollutants from various sources including raw sewage discharges, combined sewer overflows (CSOs), industrial discharges, and agricultural or urban runoff to name a few.

In response to these threats, the BWQ implemented Industrial Pretreatment Programs, testing of the Wastewater Pollution Control Facility (WPCF), and biological monitoring of fish, aquatic insects, and mussels to monitor and improve local water quality. 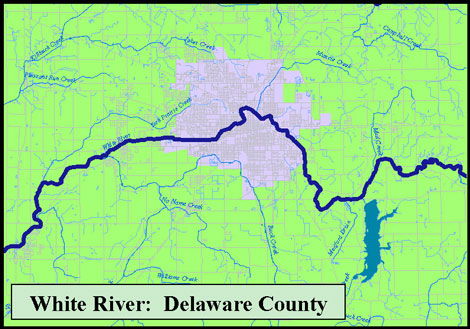 Numerous recreational activities including fishing, canoeing, hiking, bird-watching and many others are provided by this river. The White River also provides water for crop irrigation and industrial uses. It is the primary source of drinking water for several cities, including Muncie and Indianapolis.

Today, cleaner waters have led to a return of numerous fish, mussels, birds, and mammals along the White River. Though much has been accomplished, many threats to water quality remain. The BWQ will continue its efforts to restore and protect the resources of the White River for the citizens of Muncie and Delaware County.

Today there are 65 species of fish present in the White River in Muncie.

More than 100 species of insects are present, with the majority being clean water species.

Through BWQ programs, the White River has shown extensive reductions in pollutants. The graphs below display changes that have taken place as measured just downstream from Muncie. 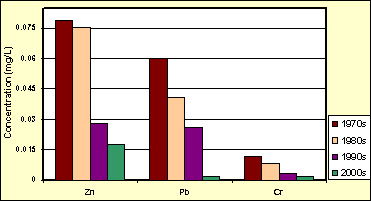 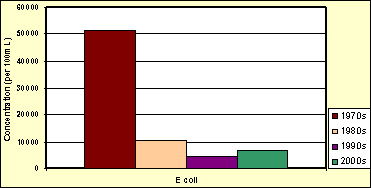 E. coli concentrations have been reduced 87% from the 1970s.

During rainfall events, untreated wastes may be discharged directly to the White River