Freshwater mussels are essential to aquatic ecosystems because they are the natural “filters” of the waterways. They were once plentiful in the Midwest but have been depleted through numerous human activities. Native freshwater mussels are now protected (it is illegal to touch not only live mussels, but the shells as well!) and many of the pollution and exploitation problems that existed in the past have been corrected. Now the focus is on replenishing native populations. Scientists are helping by raising mussels in controlled laboratory settings, allowing more mussels to be returned to the river than would survive in nature. 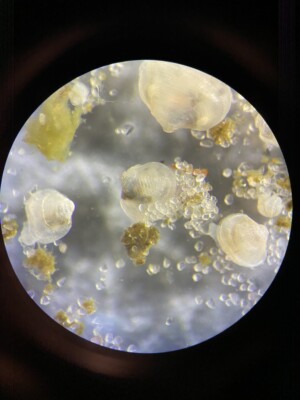 Early in the spring, permitted BWQ and DNR biologists carefully and temporarily removed gravid (carrying young) female Plain Pocketbook mussels from the White River. The young were carefully extracted and placed on the gills of 40 Largemouth Bass (their host fish) for the short, but essential parasitic stage of their life. After spending a few weeks attached to the bass’ gills, the microscopic mussels dropped off to the bottom of the aquariums where they were siphoned and placed in tanks with fine sand. After four months of constant care in aquariums, some mussels were moved to an outdoor “raceway”, created with the help of the Muncie Water Pollution Control Facility Plant Maintenance staff. In this system, they receive water and algae directly from the river. The remaining mussels were placed in special rearing cages in Prairie Creek Reservoir. Growth will be analyzed and compared from each system before the mussels are released in sections of the White River in Delaware County where few mussels are found to assist in replenishing populations in our area.

Learn more about Freshwater Mussels in the White River!