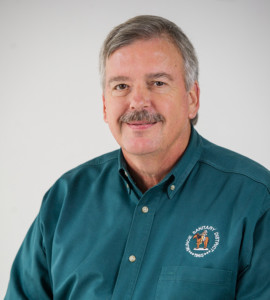 Mike Cline is the Board Vice President. Mike graduated from Ohio State in 1976 with a Bachelor of Science degree in Civil Engineering and specializes in water, wastewater and stormwater engineering. He spent almost two years as the Construction Inspection Engineer at the Muncie Wastewater Treatment plant in the early 1980’s. Mike and his wife Judy recently celebrated their 33rd wedding anniversary and have a daughter, Melanie. Mike has been active with Engineers Without Borders, served as a mentor for a faith-based program that helps young men who will be released from prison learn to become better fathers, and is a referee for small college and high school rugby games in Central Indiana. Mike received the 2013 Indiana Consulting Engineer of the Year Award from the ACEC. He is in his fourth year as an MSD Commissioner.